Posted by Shutter Medic on 1/13/2014
Share |
There are basically four different types of hinges for shutters.  They can be classified as:
1. Mortised
2. Non-mortised
3. Wrap Around
4. Inter-Panel
Before we get into the differences between each, let's go over a few terms to identify the various parts of a hinge.  A hinge consists of two plates that are joined by a single hinge pin. The plates are normally referred to as flags. Each flag will contain a number of holes for the hinge screws.  The two flags are notched and rolled to form a cylinder where they meet.  These alternating cylinders are called knuckles.
The traditional mortised or butt hinge is similar to that found on the front door

of your home.  In the closed position the flags are parallel with a small space (called offset) between the two.  This type of hinge requires the installer to cut into (mortise) the shutter panel stile and recess the flags so they are flush with shutter frame.  This type of hinge lends itself well to heavy shutter panels and doors.  Negatives are the increased labor of recessing the hinge. Also, once your shutter panel has been cut into to recess the hinge, you will be relegated to using that same size hinge. Shorter hinges, if desired, would leave an unsightly gap.
Non-mortised hinges for shutters are the most prolific type used nowadays. 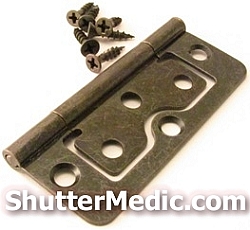 Unlike the mortised hinge, the non-mortised hinge has flags that recess into each other in the closed position.  This negates the requirement of having to cut into the shutter panel and or frame to recess the hinge.  For the most part, plantation shutters made of poplar or basswood are much lighter than your front door and do not require a heavy duty mortise hinge.  The non-mortise hinge when in the closed position provides a 1/16th inch gap between the panel and frame which is standard industry practice. These shutter hinges are also offered in a wide selection of finishes. The model hinge depicted here is the H555.
When talking about hinges for shutters, the wrap around hinge is one that is 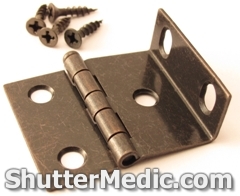 used for a specific type of installation requiring hang strips. Unlike a
standard hinge that contains two flags with apposing screw holes, the wrap-around hinge contains an outside flag in the shape of an â€œLâ€. This outside flag wraps around the shutter panel. On the short part of the â€œLâ€ located behind the shutter panel are the screw holes.  This is where the hinge attached to the hang strip.  Although it is not necessary to mortise the straight flag that is attached to the stile, this can be done if desired. The model hinge depicted here is the H1-58.
Inter-panel hinges are utilized when attaching two shutter panels that abut each other.  This type of hinge has an offset pin that, when open, allows the flags to lie flat. The hinge is normally installed on the rear surface of two shutter panels spanning the stiles and the pin located in the center between the two stiles. Installation of this hinge does not require a mortise.
Inter-panel hinge H255 is depicted here.
Previous Post
Next Post